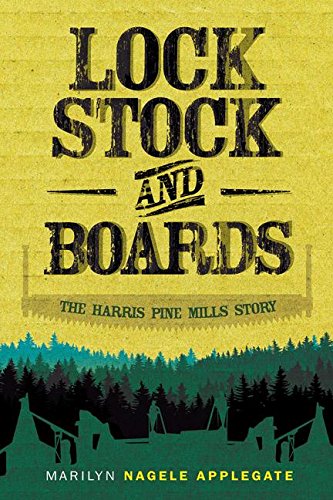 MARILYN NAGELE-APPLEGATE AND RODNEY APPLEGATE
PRESENT THE HISTORY OF HARRIS PINE MILLS AND ITS INFLUENCE IN
WALLOWA COUNTY AND JOSEPH IN PARTICULAR.

Mrs. Applegate has just published her fascinating book, Lock, Stock and Boards: The Harris Pine Mills Story, the tale of Clyde and Mary Harris, natives of Milton-Freewater, who founded the Milton Box Company in the early 1900s. It grew to become Harris Pine Mills which he eventually gifted to the Seventh-day Adventist church.  Charles Nagele, Marilyn’s father, was chosen by Clyde Harris to run the company after he gifted it and was CEO for many decades until his retirement.

The Applegates along with Marilyn’s brother, Chuck Nagele and his family, still occupy the old Harris cabin on Wallowa Lake most summers.  They were raised here in summers since the early 1950s and raised their children here.  The Applegates will present the fascinating history of the Harris Pine Mills in Wallowa County and will show an old short film on logging in the area.  Rodney Applegate served as CEO of Walla Walla General Hospital for many years and has since traveled to other countries helping other hospitals develop better medical and administrative processes.

Don Scully will introduce the noon bag-lunch presentation at the Josephy Center, September 1.  Don knew Clyde and Mary quite well, fished with him and worked at Harris Pine Mills including pulling green-chain at Tollgate.  He has been coming to Wallowa Lake since the 1950s.

And then look for news of a special program on Tuesday, September 1, by members of the Harris family on their long tenure and work in Wallowa County (Harris Pine Mills!)