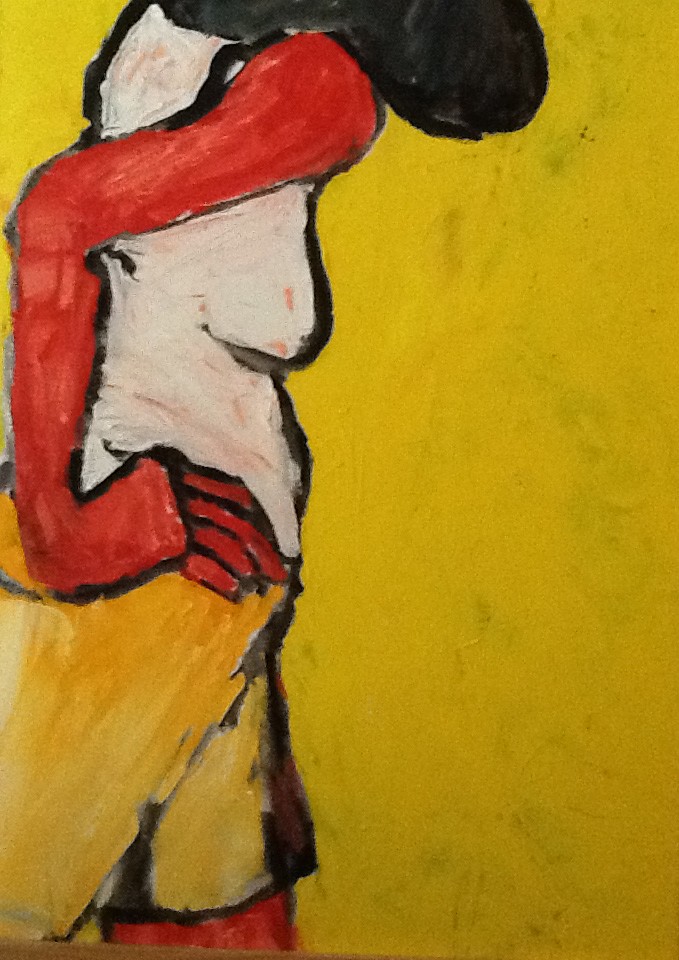 “What a privilege to present the work of these very special Wallowa County artists”, said Mike Koloski, of the new exhibit to open at the Josephy Center for Arts and Culture in Joseph, Oregon. Koloski is guest curator for the exhibit “Miniatures to Murals – a retrospective exhibition honoring the work of four beloved artists of Wallowa County”. The exhibition featuring the art of Bob Fergison, Barbara Fredrick, Gene Hayes, and Eva Slinker will open at the Center on Saturday, April 5th with a reception from 7-9pm. The show will continue through 29 April. On Saturday, April 12th, Koloski and the honored artists will host a “Walk Around” of the exhibit at which they will discuss the artworks and field question from the audience.
Bob Fergison Bob Fergison brings to his art a very diverse background in terms of education and work experience. Born in Seattle, he spent his formative years and much of his adult life in Portland, Oregon. Educated at Lewis and Clark and Reid Colleges, Bob served as photo interpreter with an Army intelligence unit near Heidelberg, Germany. He has worked in blue collar jobs for the Forest Service and the Army Corps of Engineers. He also worked as a cook/chef, and spent six years working in the slurry room of Parks Bronze. Bob at other times put on a suit and worked in the corporate world in sales, marketing, and as publisher/editor of nationwide corporate newsletters. For years he was a competitive runner and as a senior ran marathons in 3+ hours. Bob not only makes art but he has actively supported and promoted the arts in Wallowa County and the region. He generously opened his home to visiting artists and has hosted innumerable dinners and after glows around art events.
For many years a lively party and discussion could always be found at Bob’s apartment after an art opening or concert. He was also active in arts organizations and served as chairman of the Eastern Oregon Arts Council. Bob was recognized by the Wallowa County Chamber of Commerce, as the Leader in the Arts for the year 2006. In 2005 Bob left Wallowa County to live in Seattle closer to his children and the Fred Hutchison Cancer Institute where he was being treated for two different cancers. Then given only eight months to live, five years later, his oncologists pronounced one of his cancers to be in deep remission, and the other, while incurable, could be treated and “managed”. Before the ink dried on that prognosis in 2010, Bob returned to the County to live again in Enterprise.
Throughout his medical regime, Bob has remained positive and has co ntinued to practice his art despite the fatigue brought on by medical treatment and failing vision. Artistically Bob Fergison’s art expresses the flamboyance of his talent and personality. His bold, direct pen and ink drawings of figures and architecture demonstrate his skills as a draughtsman as well as his keen sense of composition. Bob’s scenic oil pastels are favorites among his patrons. These strikingly colorful pieces are in many private collections around the region. His oil paintings may be alternately full of lavish color or as spare as Japanese brush paintings. Or, a single artwork may incorporate all of the above! Regardless, Bob’s work always shows the directness and immediacy of his hand and keen mind. The Josephy Center is pleased to honor Bob Fergison not only for his wonderful art but also for his selfless service to the Wallowa County art community .
Barbara Fredrick Barbara (Tippett) Fredrick was raised on a large cattle ranch located on lower Joseph Creek. From childhood she was inclined toward the arts, creatively drawing on the world around her for inspiration for her paintings. Barbara worked primarily in watercolor, although she did experiment with oils. She loved to paint miniatures, but also produced some larger works, many of which grace the walls of her relatives’ homes. These depict branding scenes and ranch life often featuring her brother Don (Biden) and other family members. Barbara loved to paint chickens, cows, the hills where her family ran cattle, and scenes of daily country life. She toured the family ranches with her camera, taking photos to use for inspiration and models.
In 1972, Barbara opened a small gallery along Hurricane Creek Road to showcase her art. The Tippi Gallery (after her maiden name Tippett) was the first of its kind in Wallowa County. Here she sold her paintings as well as pressed flowers arrangements framed in gold frames. Later, after the Wallowa Valley Arts council was formed she exhibited her work at the newly inaugurated Wallowa Valley Festival of Arts. Barbara also showed her art in Hawaii, where she and her second husband, Arnold Fredrick, spent their winters. The Fredrick’s owned the Arrowhead ranch on Alder Slope. There, Barbara had a sunny studio in which to paint. Barbara graciously hosted many events at her home fostering fine art and cultural events in Wallowa County. Barbara’s art hangs in many homes in Wallowa County and is in private collections throughout the country/world. Unfortunately many of her artworks were lost in a fire in the Fredrick’s Valley Heights home.
This February, Barbara passed away in Punaluu, Hawaii. The entire Wallowa County arts community mourns Barbara’s passing. We regret that Barbara did not live to experience the warm regard generated through this retrospective exhibit. Nonetheless, we feel privileged to show Barbara Fredrick’s lovely, beautifully, intimate art — Art that clearly depicts her love for the rural life of her childhood and the flowers and animals that epitomize the country life of Wallowa County
Gene Hayes At 92, Gene Hayes is the most senior of our honored artists. Gene was born and grew up in Wallowa, Oregon. Graduating with the Wallowa High School class of 1943, like many of his generation, he was soon in uniform serving his country. As an army scout and Browning automatic rifleman he made his way unscathed through Australia, New Guinea, and the Philippines, only to soon after lose an arm to a feed mill at home in Wallowa County. Gene had drawn since he was a youngster, and determined to continue, he trained his left hand to take over the task. Gene attended the Turner Art Center in San Francisco and later Oregon Tech in Klamath Falls, studying commercial art and sign painting. After a short stint at logging and working for the Forest Service, Gene took up his brush and never looked back. Gene’s work is vast and varied.
His studio/gallery in Wallowa is filled with his art. Every wall and horizontal surface sings with brilliant oils and watercolors. Beneath the hanging art are completed canvases stacked three deep against the wall. Binders are full of his drawings in pencil or ink. As if to emphasize that his art cannot be contained by mere walls, Gene Hayes’ murals decorate buildings from Wallowa to Joseph and outside the County in Umatilla, Oregon. This prolific legacy is due in a large measure to Gene’s unpretentious, workmanlike approach to making art. Even as a nonagenarian, Gene’s easel and work space is completely set up and ready to go. One is likely to find him at work, pulling mountains, fields, and animals from his long experience and setting them onto paper with his brush. Beyond their colorful beauty, Gene’s paintings reflect the tradition and history of the region. Indian encampments, farm work, ranching, long gone buildings populate his work, recording much that is no longer with us.
Throughout the years Gene has been an enthusiastic participant in art festivals, quick draws, plein air events, and other artist gatherings. The Josephy Center is honored to exhibit his work and recognize his artistic contribution to the County’s heritage.
Eva Slinker

Eva Havas Slinker was born to Hungarian parents, in Cuba, in 1929. Emigrating to the U.S. she grew up in Oakland, California and attended college in Michigan to study music. She met her second husband, Al Slinker, in the Bay area. They moved to Wallowa County in 1968 and purchased a ranch on the Alder Slope. She threw herself into the role of consummate ranch wife and partner in a sheep and cattle operation that at one time ran 500 sheep and 100 head of cattle. She was an active member of the Cowbelles, rode horses, branded calves and took part in roundups with many of the local ranchers. But Eva’s passion for the arts was also strong. Her love of all things Art placed her in the foreground of the emerging visual, literary and performing art scene of the County. Eva was instrumental in organizing Fishtrap and the Wallowa Valley Arts Council.
She was a founding member of the Eastern Oregon Arts Council (ArtsEast) as well as the Eagle Cap Fine Arts Camp. Statewide Eva served on the Oregon State Arts Commission from 1981 to 1985. After her youngest daughter, Sam, graduated from Enterprise High School, she actively began her own personal visual art career. Eva returned to college at Eastern Oregon University in La Grande, receiving her BA in 1987. She followed that with a MFA from Portland State, in Portland, Oregon. Artistically, Eva was experimental – willing to explore new medium and styles. She seems at ease with everything she tries. While her early paintings inspired by her life on the ranch, are very representational watercolors of rural buildings, landscapes, and canyons, her later work became more abstract and Expressionistic often incorporating mixed media and assemblage.
Eva is also a fine draughtsman and comfortable with portraiture and figurative work, including animals. Her travels and classes took her all over the Southwest and Mexico. She brought back from her travels paintings of vibrant flowers and tropical beaches to spice up her oeuvre. Serious illness befell Eva in the late 1990’s. She was inspired by this to form groups centering on art as a healing force. Eva moved to the Salem area in 2004 to be close to her son and family and her sister. She is now 83 and resides in an assisted living facility in Salem. While the Josephy Center is privileged to exhibit a collection of Eva’s work that stands on its own artistic merits, we wish that Eva could travel to enjoy it with us. Unfortunately this is not the case. Nonetheless, we can, remember her as an inspiring example of an artist who truly understands the benefits of endlessly seeking, learning, experimenting, and expressing. We honor her as not only an excellent painter but also as one of the energetic forces that created the vital artistic community that the Josephy Center serves today.
“Miniatures to Murals” can be viewed at the Josephy Center for Arts and Culture, 403 N. Main St. in Joseph from April 5 to April 29, 2014. For more information about the Center, see www.josephy.org or call 541-432-0505.