The festival is the largest juried fine art exhibition in Eastern Oregon, featuring representational realism as well as contemporary art from the Pacific Northwest and beyond.

This year’s festival—Opening Reception, Afternoon of the Quick Draw, live music, and Silent Auction—will be held the weekend of September 16th.  Leading up to the weekend, the Josephy Center is excited to offer art workshops for local and visiting artists as well as a En Plein Air Competition which will begin on Saturday, Sept. 10th and end on Friday, Sept. 16th, Plein Air works will be on view at the Josephy Center until Sept. 18th. We will, again, host a Joseph Gallery Walk; and have plans for a concert at theJosephy Center for Arts and Culture time to be announced at a later date.

Sept. 18th:  Silent Auction bids close at 1:30pm.  Art buyers may pick up their purchases at 2pm.  Unsold art must be picked up by the artist, or a designated representative, between 2:30-4pm
Josephy Center for Arts and Culture. 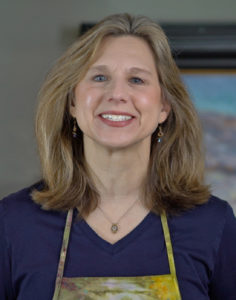 Barbara’s painting journey resulted more so from stubborn determination than natural talent. Her earliest training was with the late Juanita Crosby in Bordentown, NJ, who instilled a strong initial foundation of painting basics, and with whom she studied during her high school and college years.

After receiving a Bachelor of Arts degree in 1986 from The College of New Jersey (formerly Trenton State College) with a major in Art and emphasis in Advertising Design, Barbara’s early career was spent in advertising as an art director, then later in corporate marketing communications. Without much time for painting during these earlier careers, she always knew she would eventually continue her original artistic passion, and in 1999 she gradually but intensely began to do so. Finally, in 2002, she was able to turn her focus to a fine art career, pursuing it full steam ahead.

Working in oil and pastel, Barbara strives to capture light-filled landscapes in a painterly, impressionist style. She holds signature memberships in Oil Painters of America and American Impressionist Society, and has earned the distinctions of Master Pastelist in the Pastel Society of America and Eminent Pastelist in the International Association of Pastel Societies.

Born and raised in New Jersey, Barbara also lived in Atlanta, Georgia for many years until she yearned for snow and mountains for her landscape subject matter, which prompted her family’s move to Bend, Oregon in 2015.

Barbara is also a popular workshop instructor throughout the US, teaching workshops coast to coast each year. Visit her website at www.barbarajaenicke.com.

Thanks to our Past Donors!