The Josephy Center for Arts and Culture (JCAC) is a gathering place to celebrate, promote and inspire arts and culture for all Wallowa County residents and visitors.

We host up to eight exhibits annually. Exhibits show for six to eight weeks. Exhibit themes delve into artistic expression and local subject matter such as landscape, rural living, history, ranching, animals, etc.  We highlight local talent as well as artists across the country by offering open calls to artists several times a year, and showcasing their proposals for special exhibits.

The small but extensive library is located upstairs.  Rich Wandschneider, Library Director, sits just inside the entrance and is always available to answer questions about Wallowa County, local history, and regional history regarding Plateau Indians.

The Josephy Center is proud  to offer an incredible ceramics program which includes access to a modern ceramics studio, classes for all ages and specialized workshops and clinics. With over twelve years of experience, our lead ceramics instructor, Pamela Beach, is able to put together fun projects–from dinosaurs and monsters to functional wares like mugs and bowls–that students of all experience levels can easily follow. Positive affirmation and guidance helps students’ skills progress exponentially from class to class. After a full term students can expect to see amazing results!

In the Josephy Center's art shop you will find fine art and craft such as glass art, jewelry, ceramics, wood sculpture and more, created by local artists. The shop also offers a wide selection of books by local authors and  about the Nez Perce (many written by Alvin Josephy) Native Americans, local history. You can also find locally made cards, art supplies and JCAC swag including t-shirts, tote bags and more.

The Life & Work of Alvin Josephy

As the founding board chair of the Museum of the American Indian, Alvin Josephy’s works brought the Nez Perce and all Indians to national attention. 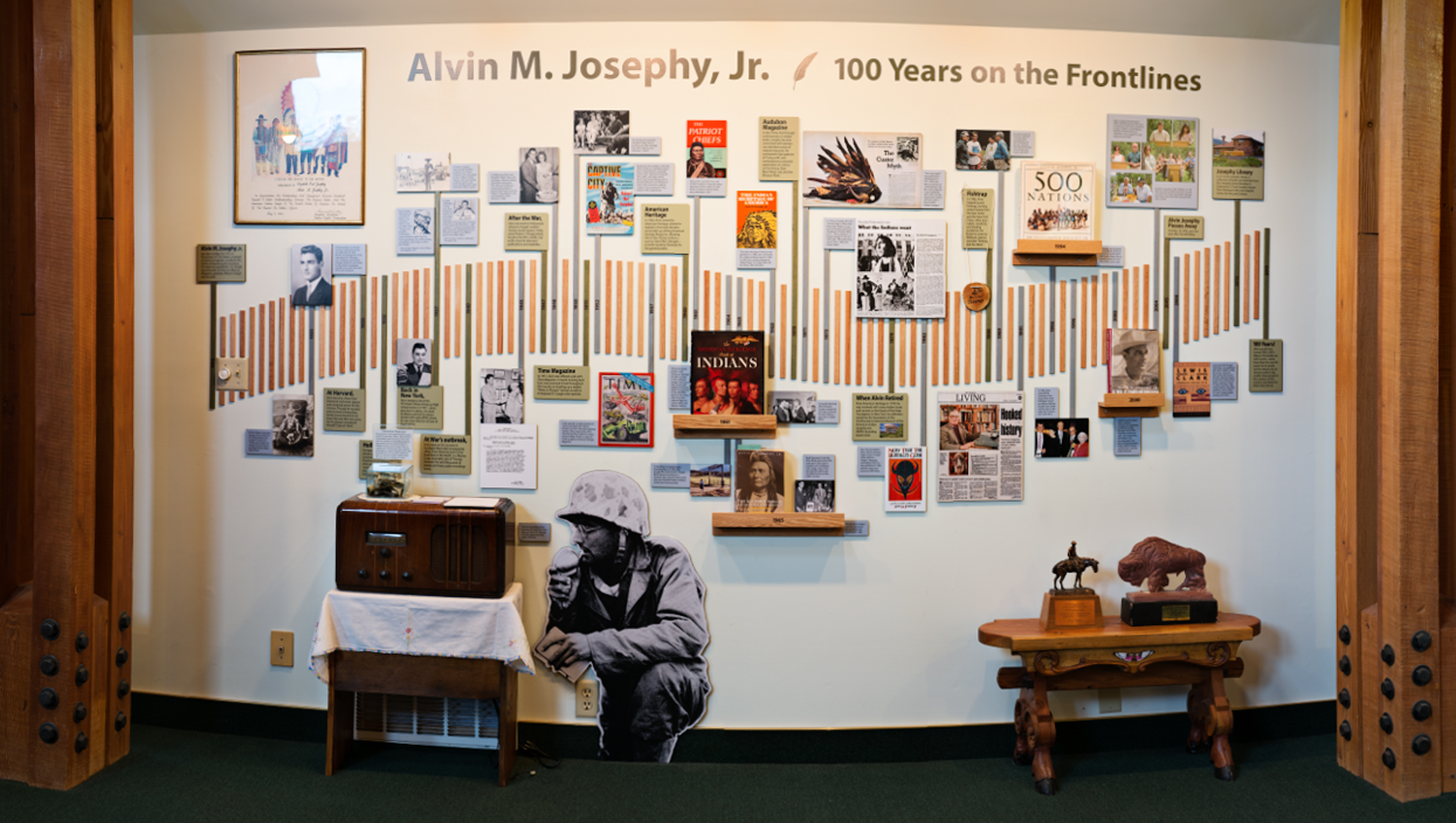 This wall map and exhibit show a small piece of the Nez Perce story—the wal? wa ma band of the ni mi pu who lived in the wal? awa country. It can viewed in the loft at Josephy. 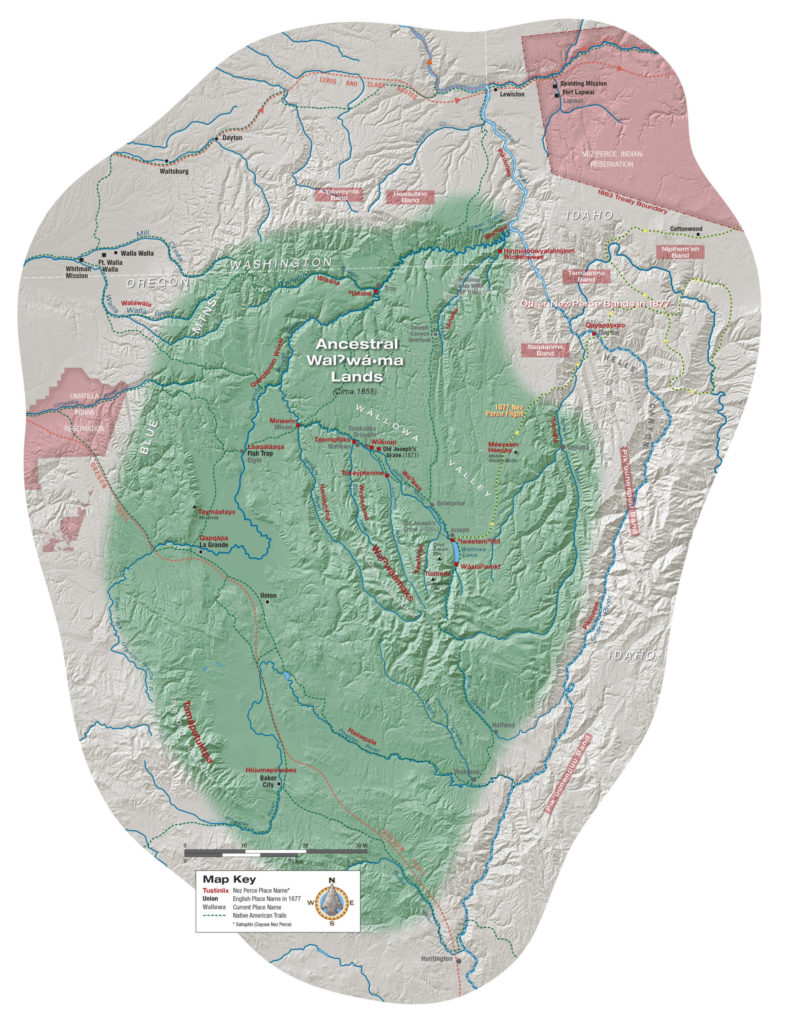 Translated from the Nez Perce language, the name of this bronze sculpture is “I return from a difficult journey.” It's the first bronze sculpture by a native artist (Doug Hyde) on Main Street Joseph, and was funded by the Oregon Community Foundation's Creative Heights project. It can viewed year-round in front of the Josephy Center in north Joseph.

The Josephy Center’s Print Studio features a state-of the art (Takach Floor Model 3460) printing press suitable for a variety of printmaking processes including etching, woodcut and linocut relief prints, intaglio, mezzotint, collage, photo lithography, stencils, monoprint and other techniques.  Printmaking workshops are open to teens and adults with options for beginners to more advanced artists.  Nancy Clark’s enthusiasm for printing making, along with financial help from Wildhorse Foundation, made this studio possible.

The Josephy Center now offers workshops, classes and open-studio time for guild members. Click here for more information about guild membership, and here for a list of our current printmaking classes.

Brown Bags are free, online and/or in-house discussions that are held twice a month on Tuesdays.  They are a great way to find out what local residents are doing; learn about county businesses; watch performances; listen to lectures; exchange ideas and insights on a variety of pertinent topics.

To get the most out of the Brown bags, go to our brown bag page to see what’s coming up.  If you missed a Brown Bag, go to our YouTube channel. If you’d like to be a Brown Bag speaker or presenter contact Rich Wandschneider at 541-432-0505.

Join us for a monthly book discussion!  Visit our Book Group page for more information, and click the Zoom link to join. Books, chosen each month, focus on Indians, diversity, pandemics, racism and gender disparity.

Festival of the Arts

The Wallowa Valley Festival of the Arts, since 1982, is one of Eastern Oregon's finest juried exhibits. You will find it happening at the Josephy Center, and all over town, for 5 days every September.  It includes a Fine Art Show, En Plein Air Exhibit, Quick Draw Competition, & Summer Arts Classic Concert.

JCAC hosts two annual festivals: a Youth Art Festival and a Wallowa Valley Festival of the Arts, one of Eastern Oregon's finest juried exhibits which started in 1982.

This sophisticated showcase of classical music is hosted as a finale to each year's Wallowa Valley Festival of the Arts, using our baby grand Samick piano in the art gallery. Composers have included the music of Leclair, Debussy, Bizet, Mozart, Cavallini, and Bach.

In partnership with the Wallowa Valley Music Alliance, we host an annual Christmas Concert, generally on the Sunday before Christmas each year. Music Alliance executive director Janis Carper says, “This is one of our favorite events– It’s always joy to share music with the community at this special time of year.” The Music Alliance and Josephy Center have partnered several times over the past decade, pairing music with visual art to bring an even richer experience to their patrons.

The Josephy Center (JCAC) offers youth art classes and programs on site and at various locations around the county, including schools. This includes youth art Fridays for kids, ceramics classes for kids and adults, special seasonal workshops, and a printmaking guild.